These started out as ugly Dollar Tree memo books. 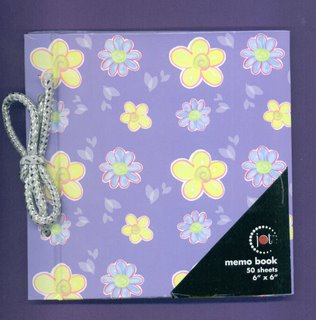 The purple book with yellow flowers and that gawd-awful silver cord is the before if you couldn't tell by looking. LOL These were so fun, quick and easy to do. I think I'll pick up a few more tomorrow and stick them away for Christmas gifts. 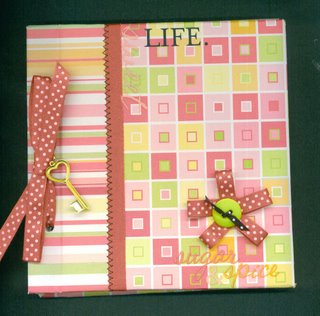 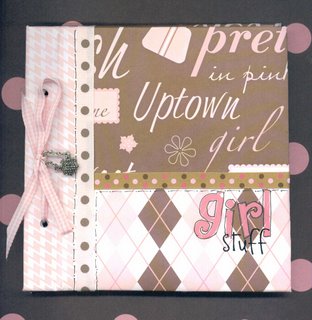 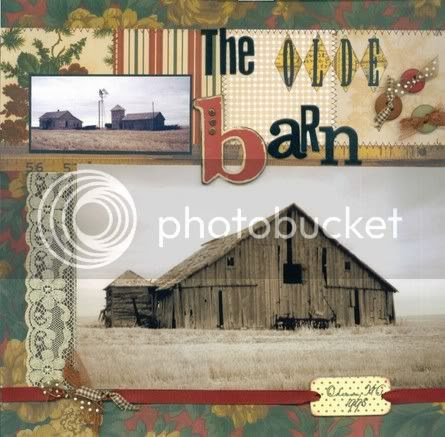 3 products for this challenge are 1) brown & burgandy colors, 2) lace and 3) multi-mediums for title 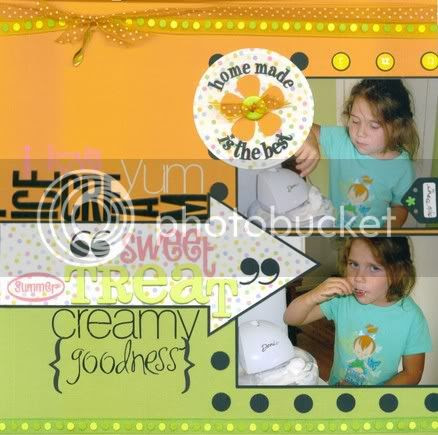 Products for this challenge were: 1) citrus colors, 2) foliage of some type (flower, leaf, stamp, sticker, whatever) and 3) transparency or vellum ("homemade is the best" is the transparency on this page).

The main part of the sketch for this one is a scraplift from the pages of CK mag. Love the arrow and the dots around the pics. Then I decided to get funky with the title, which is totally different from my usual style. I really like how this came out. It was a fun one! The spoon charm is from www.acharmingplace.com , and ribbons & button are from WalMart.
Posted by Shar 1 comment: 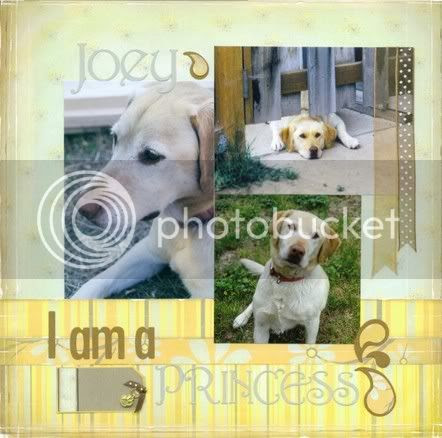 We had no intention of getting an 'older' dog when we answered the ad in the paper for registered yellow lab pups. When she told me she had already sold all the puppies I knew Randy would be disappointed, but then she said she had an older dog she was caring for temporarily until she could find her a home, if we were interested. We still had Jet, our black lab, who was getting up in years and wouldn't be able to hunt much longer and had hoped to get a pup Randy could train before Jet retired, but we decided to go take a look at the other dog just to see. She was so sweet, and she and Jet hit it off immediately. After about half an hour of play, they both hopped in the back of the truck and Joey was ours. And instead of spending $200 for a puppy, we spent nothing but the gas it took to pick up a year old dog. She is a wonderful companion and hunting partner, and a totally spoiled princess!!
Posted by Shar No comments: 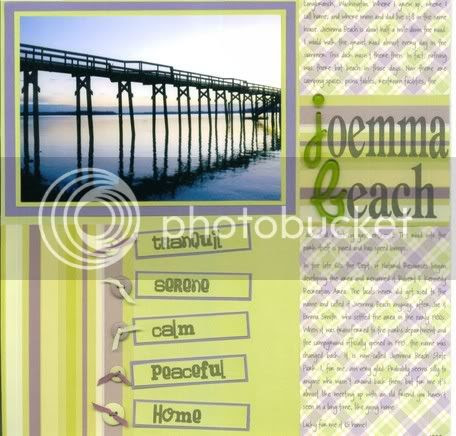 Journaling:
Longbranch, Washington. Where I grew up, where I call home, and where mom and dad live still in the same house. Joemma Beach is about half a mile down the road. I would walk the gravel road almost every day in the summer. This dock wasn’t there then. In fact, nothing was there but beach in those days. Now there are camping spaces, picnic tables, restroom facilities, the dock and a locking gate entrance. The road into the park itself is paved and has speed bumps.

In the late 60s the Dept. of Natural Resources began developing the area and renamed it Robert F Kennedy Recreation Area. The locals never did get used to the name and called it Joemma Beach anyway, after Joe & Emma Smith who settled the area in the early 1900s. When it was transferred to the parks department and the campground officially opened in 1995, the name was changed back. It is now called Joemma Beach State Park. I, for one, am very glad. Probably seems silly to anyone who wasn’t around back then, but for me it’s almost like meeting up with an old friend you haven’t seen in a long time, like going home. Lucky for me it IS home!
Posted by Shar No comments:

This is last night's page, Gracie's first hunting trip with Grampa. She was so excited to go and was ecstatic at the trophies they brought home. 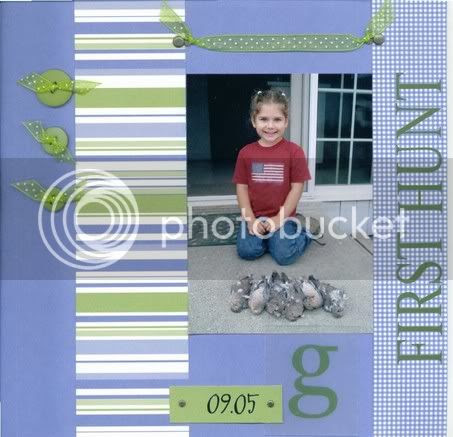 This hunting page is one of my favorites for Randy's hunting album. I loved the sketch (sorry I have forgotten which publication I saw it in) and have wanted to use it for a while. Who says you can't use ribbon on man pages. What a crock. LOL Here I used FOURTEEN different ribbons, and it certainly doesn't look any less manly just for the use of ribbon. I used rubons on the twill for the "Hunter" title. Oh, and don't look at the WHITE whiskers on his chin. He didn't believe me till I showed him the pics how sharp digital images are and how much they pick up. LOL 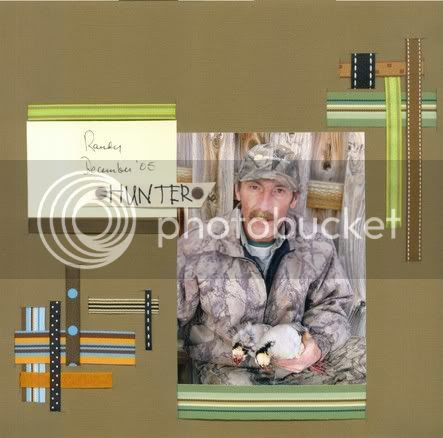 Granddaughter Courtney last summer. First thing she did when they got here was climb into Grampa's shoes! This was a challenge page. Use 1) peach color scheme, 2) shaped clip and 3) incorporate a song into the page. 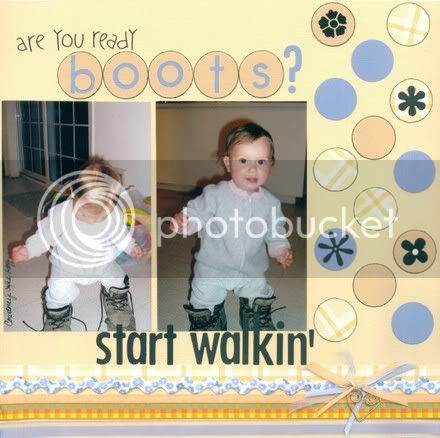 Awww, Grace. What a girlie girl. She has LOVED weddings and everything about them since she was tiny! This particular "wedding" was a couple of years ago. She can make grampa Randy do anything (he is so wrapped around her finger it isn't even funny! LOL) and here she "made" him be her groom. LOL She bought this veil with her own money at the dollar store too. There are two more pics in the folder behind the main photo. In the pic below you can see how much fun Randy was having. LOL!

Journaling reads:
Grace loves all things girlie from clothes to shoes, purses to makeup, and shopping to weddings. She LOVES weddings and takes it personally if she isn't asked to be flower girl even if she doesn't know the people are are getting married. She loves to play wedding and bought this veil with her own money at the dollar store. Doesn't Randy look excited to be playing the happy new hubby? Grace can make him do anything. And I get to take pictures!! 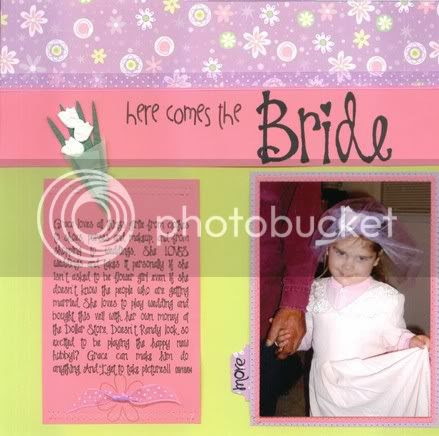 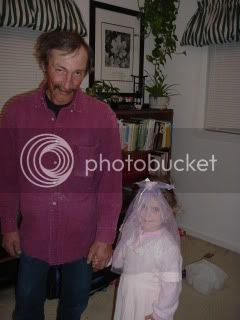 DIL, Beka with granddaughter Courtney a year ago March. 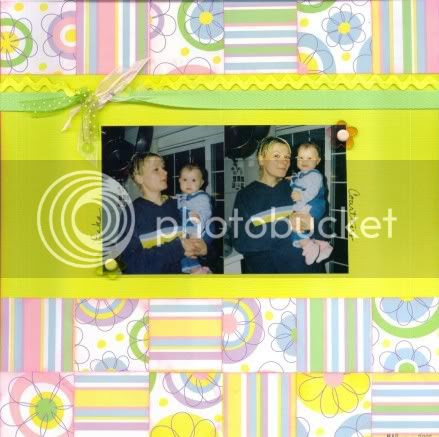 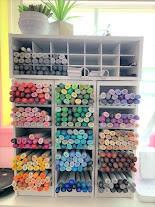