Journaling is in the Auto Repair folder ;) The story goes like this.

The truck started acting up around Thanksgiving time; actually I think it was before then. Randy replaced this part and it would run ok, then he'd replace that part and it would run ok but still not good, and so it went, replacing just one more thing, until finally it wouldn't run at all. Of course, then the snow came and it got so cold he couldn't work on it anymore for fear of breaking wires from the brutal cold freezing them. So, after years (and I do mean years!) of trying to convince him to get another truck, he finally had no choice. (Which brings us to the sequel--layout in progress.) It has now become a grudge match and he is determined to get that beast running again if it kills him! Pics were taken Christmas Eve Day. As of today, January 16, 2009, it is still sitting there, in the same spot in the driveway, laughing at Randy. Cruel!! 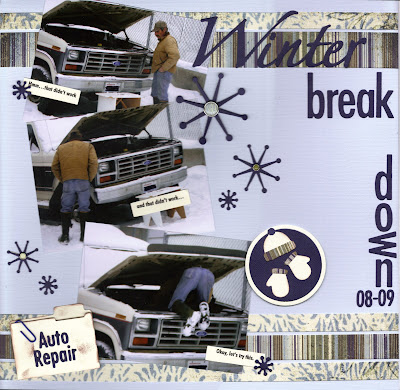